Sailing in a traditional Faroese boat is a unique experience. You come close to the sea, the landscapes along the seashore, the wildlife and the mysteries under the water’s surface. 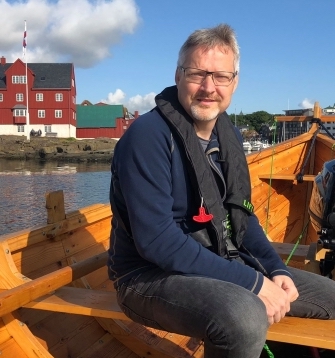 A platter with various Faroese specialities, such as dried fish with whale blubber and potatoes, dried lamb and salted lamb.

Beverages: Your choice from local beer, soft drinks and water.

Desert: Home made cake with coffee or tea.

This is an authentic full day experience. You get an opportunity to angle in one of the most beautiful areas of the Faroe Islands. After returning to the marina, you are invited to a local home in Elduvík. In Elduvík the fish that you have caught will be one of the ingredients in a wonderful meal!

You sail out from the marina of Funningsfjørður on Eysturoy. You sail in a traditional Faroese boat – the utmost of Faroese handicraft.

Sailing out through the fiord you see dramatic landscapes. On the western side of the fiord you sail by the beautiful village of Funningur, situated at the foot of the highest mountain of the Faroe Islands, Slættaratindur. To the east you see the picturesque village Elduvík situated on both sides of a river flowing gently through the valley. You see the gorge, “Elduvíksgjógv” that the villagers have used as a natural harbour for centuries.

The locals say that if you have a fishing rod and a pot you will always get by here. Indeed, the fiord is rich in fish. You may cast your fishing line off Barmur by Elduvík, or you may sail further out the fiord to the cape of Funningsmúli. Several species of fish may take your bait including haddock and Atlantic cod.

Sailing close by the shore of the cape of Elduvíksnes you return to the Funningsfjørður marina. After returning to the marina you will bring some of your catch to a local home in Elduvík. The driving distance is 8km. If you do not have a car with you, we will arrange for the transport to Elduvík.

In Elduvík you are invited into the home of Frida and Poul Johannes. Your hosts are traditional sheep farmers, and your menu will, apart from your fish, also include traditional Faroese specialities! During your visit, your hosts will communicate local traditions, culture and cuisine.

There can be up to 5 guests on each tour. This tour needs a minimum of 2 adult tickets to depart. By booking 5 tickets you ensure a private tour. By request we can have groups of up to 10 guests in two boats.

Meeting time: Mondays and Thursdays at 9am and 13:30pm.

Excellent experience. Trustful skipper and excellent guide both for fishing and landscapes. Enjoined a lot. To be definitely recommended.
31/08/2019   Luciano and Elena from Italy

We had a fantastic time. An experience not be missed!